A circumnavigation and exploration of the island of Newfoundland & outlying islands

Our Canadian Maritime and Newfoundland voyage allows you to embark on the National Geographic Explorer and sail into Eastern Canada's breathtaking natural beauty. Discover Newfoundland's little known, astonishing Viking past. Your journey of pure discovery ventures to the legendary islands of Cape Breton, St. Pierre, and the Îles de la Madeleine.

Immerse yourself in the region’s extraordinary history
Venture into the ancient Viking settlement of L’Anse aux Meadows, the only widely accepted site of trans-Atlantic Viking establishment and very early Norse exploration. See WWII harbor defenses, and visit the only North American island that remains under French control, an outpost of its era as a colonial superpower.

Revel in wild landscapes
Discover sweeping dunes, wind-and wave-carved cliffs, and sandstone hills in a wild land. Keep an eye out for moose, see birds including charming puffins, and rely on our eagle-eyed naturalists to keep an eye on the horizon for whales.

Discover Gros Morne National Park
Explore the intriguing red cliffs and strange tabletop formations at Gros Morne National Park, a UNESCO World Heritage site. We’ll walk one portion of the reserve in the morning with our geologist, and then reposition Explorer over lunch to hike the tabletop formation. This site is one of the few in the world where the same rock at the Earth’s core is visible at the surface, and it has recently become the focus of NASA research since findings from the Mars rover have uncovered very similar features.

Our Newfoundland and Canadian Maritime cruises allow you to embark on the National Geographic Explorer and sail into Eastern Canada's breathtaking natural beauty. 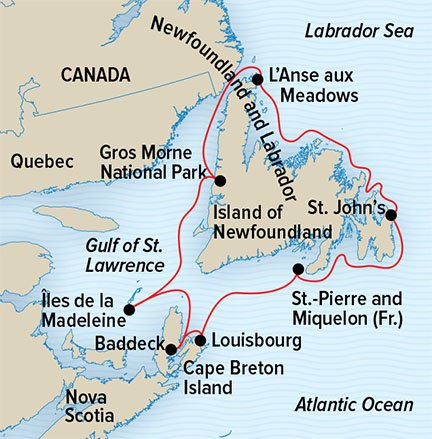 The Canadian Maritimes and Newfoundland